Ditching meat for a plant-based diet is a growing trend in healthy eating. And the science backs the move — the health benefits can be significant. For example, eating more fruits and vegetables can ease digestive problems, reduce your risk of heart disease, and even help you live longer. Whether you’re hoping to cut back on your meat consumption and forgo beef jerky, or switch to an all-vegetarian diet, it’s easier to achieve your plant-based meal goals with mushrooms. Plus, you don’t have to give up your love for jerky either.

We spoke to two registered dieticians who share the nutritional benefits of mushrooms and offer their homemade mushroom jerky recipes — no special kitchen gadgets required.

Mushrooms are a nutritional powerhouse

“Mushrooms are rich in phytonutrients — or chemical compounds found in plant foods — that are associated with protection against chronic disease,” says Gena Hamshaw, RD and author of Power Plates: 100 balanced vegan meals for one dish. “Some of these compounds may also help strengthen the immune system.”

A 2014 review published in the Journal of Complementary and Integrative Medicine suggests that eating foods with phytochemicals, also called phytonutrients, may help protect you from common diseases such as cancer, heart disease, diabetes and neurodegenerative disorders.

Plus, “mushrooms are high in fiber, which is important for digestion and helps control cholesterol,” Hamshaw says. A high-fiber diet is incredibly helpful for people with diabetes or for supporting healthy weight loss. According to a 2014 review in Nutrition todaya cup of portobello mushrooms contains 2.7 grams of fiber — more than a slice of multigrain bread and nearly the same amount of fiber as a potato with intact skin.

Mushrooms are a great meat substitute

It is common for restaurants to offer bean burgers and portobello burgers to vegans and vegetarians. But what makes mushrooms such an easy meat alternative?

“They have a firm, tasty texture that makes them a useful substitute for meat in vegan recipes,” says Hamshaw, adding that unlike meat, mushrooms “have no saturated fat.” In a 2019 study published in Food science and nutrition, scientists found that adding mushrooms to beef patties effectively reduced the patties’ sodium content without sacrificing texture or flavor. So even those who prefer a juicy steak or burger can enjoy the benefits of mushroom jerky or mushroom-based meat substitutes.

Dried mushrooms have a distinct umami taste. Along with bitter, sweet, salty and sour, umami is considered a fifth taste category, according to the Academy of Nutrition and Dietetics. Umami tends to have a deep, savory flavor characteristic of broths, roasted meats, and foods seasoned with monosodium glutamate, also known as MSG. You will usually find MSG in Chinese food as it is used as a flavor enhancer.

Mushroom jerky also adds flavor to the herbs you use in the marinade. Many jerky recipes include something salty (like soy sauce) and something smoky (like liquid smoke or smoked paprika).

The United States Department of Agriculture (USDA) recommends heating meat or poultry to at least 160 degrees Fahrenheit when making jerky. This is because bacteria present in raw meat, such as salmonella, grow fastest between 40° and 140° F. Since mushroom jerky is completely plant-based, there is no concern for the bacterial contamination of raw meat, although you should still be careful not to clean the molds before preparing them. For example, mushroom jerky can be dried at lower temperatures than meat-based jerky. (Here are the signs of food poisoning you need to know.)

According to the USDA, you can make jerky at home in an oven or dehydrator. To dehydrate jerky in an oven, rotate the pans frequently and turn the food a few times for even heat distribution and drying.

Thanks to Gena Hamshaw, MS, RD, from The Full Helping

Two portions the size of a snack

Mix all ingredients except the mushrooms into a marinade. Soak the mushrooms in the marinade for at least four hours (overnight is fine). Dehydrate in the oven or dehydrator at 114°F (45.56°C) for four to six hours, or until the mushrooms are dry and tough (not crisp). The dehydration time depends on how much liquid the mushrooms have absorbed, so adjust the time accordingly. 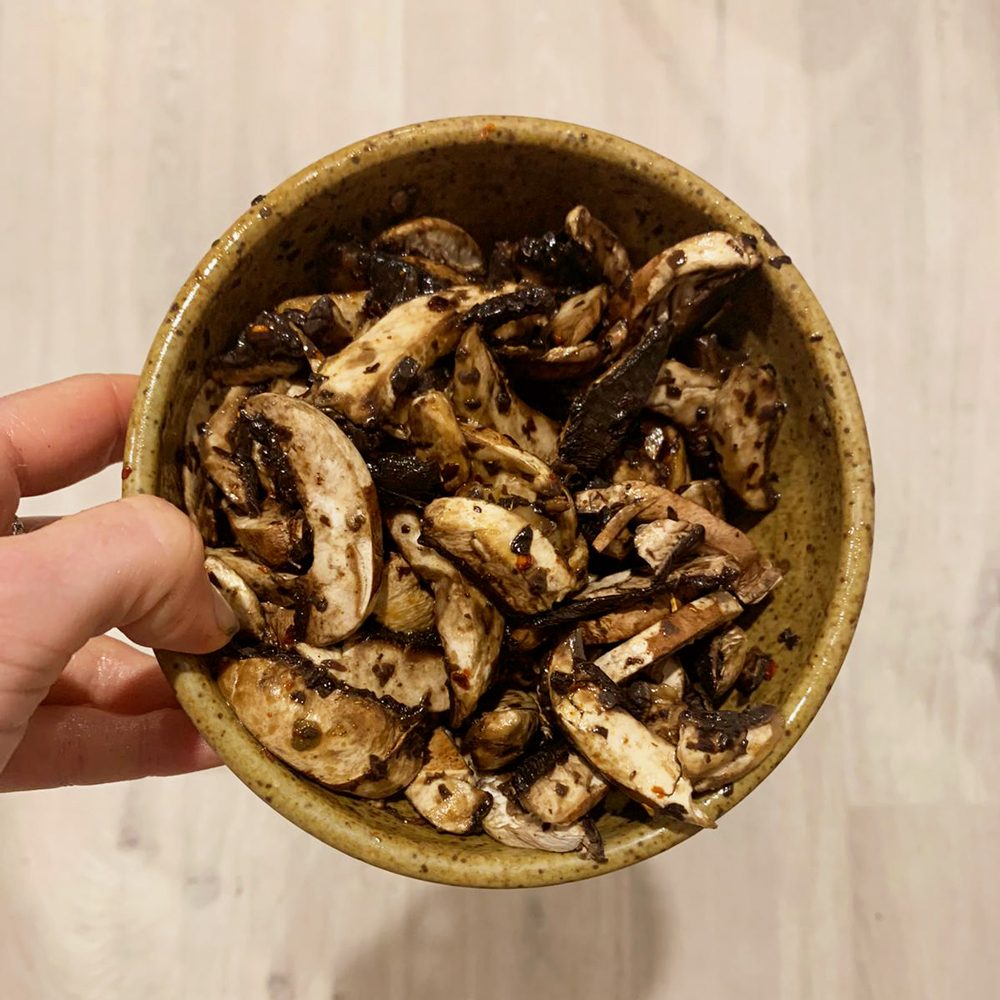 This mushroom jerky recipe from Gawith uses small shiitake or mushrooms instead of portobello shells. Gawith recommends eating more mushrooms in the winter as their nutrients can help boost immunity as it is one of the few food sources of vitamin D.

Mix the marinade ingredients (all except the mushrooms). Marinate the mushrooms in the sauce for eight hours. Then cook them in the oven at 250°F (121.11°C) for two hours.

Is sushi really healthy? † the healthy one

I had Ramen every day for a week, this is what happened