Do you get headaches or tingling after eating Chinese food? It may come from the flavor enhancer monosodium glutamate, more commonly known as MSG. Find out what MSG is, why it is used and what the risks may be.

SOMMAI/ShutterstockWhat is MSG and what does it stand for?

MSG stands for monosodium glutamate. It is a flavor enhancer that is often added to Chinese food, canned vegetables, soups and meats. It is part of a larger group of chemicals called glutamates. “MSG contains glutamic acid that is also naturally found in tomatoes, parmesan cheese, meats, walnuts, clams, sardines, mushrooms, and other foods,” says Emily Rubin, RD, the chief dietitian for the Celiac and Fatty Liver Centers at Thomas Jefferson University in Philadelphia.

What is MSG used for?

MSG is added to foods to enhance their savory or umami quality. Umami is a fifth flavor category, joining sweet, sour, salty and bitter, according to the Academy of Nutrition and Dietetics. Always check the ingredient list on the labels of prepared foods for MSG.

MSG has no texture or odor. It simply enhances the natural flavor of a food as opposed to adding a new one and tends to enhance most of the flavor when used in poultry, seafood, meat and some vegetables.

What is MSG made of?

Basically, MSG is produced by fermenting starch, sugar beets, sugar cane or molasses. Fermentation is the process by which yeast or bacteria convert carbohydrates into alcohol. This is the same process used to make yogurt and other healthy fermented foods.

Where does MSG come from?

A Japanese scientist first isolated MSG from seaweed soup in 1908 and noted its flavor-enhancing properties. He then filed a patent to produce MSG, which led to the commercial production of the flavor enhancer; and decades later, the controversy began, notes the U.S. Food and Drug Administration. In 1968, a brouhaha ignited when a biomedical researcher wrote to the editors of the New England Journal of Medicine citing a strange illness he developed after eating at Chinese restaurants — particularly those cooking with MSG. His symptoms included numbness, weakness and palpitations and became known as “Chinese food syndrome.” Despite the lack of social media at the time, the letter went viral. Shortly after it was published, everyone started using MSG and a torrent of research into its health effects began.

There has been controversy over whether some people develop symptoms such as headaches, muscle aches and tingling after consuming MSG, according to Rubin. “There is no definitive evidence for a link between MSG and these symptoms,” she says. Despite this, American consumers say some 50 years after the syndrome was first mentioned: they avoid MSG, according to the International Food Information Council, an industry-funded group.

The US Food and Drug Administration says MSG is “generally recognized as safe” (GRAS). The watchdog group requires foods with added MSG to list it on the ingredients panel as monosodium glutamate. If MSG occurs naturally in some ingredients (hydrolyzed vegetable protein, autolyzed yeast, hydrolyzed yeast, yeast extract, soy extracts, and protein isolate), the manufacturer does not need to list MSG on the label. That said, these foods may not say “No MSG” or “No added MSG” on their packaging. MSG also cannot be listed as generic spices and flavorings. Here’s a guide to decoding food labels.

Why do people think MSG is bad?

Some people may be sensitive to the additive and experience throat swelling and other symptoms when consuming a lot. Experts such as Michael Galitzer, MD, a Los Angeles specialist in integrative medicine and author of: Excellent health: a longevity guide to staying young, healthy and sexy for the rest of your life believe the flavor enhancer is dangerous: “Ingesting it can cause inflammation of the small intestine, known as leaky gut, which will result in symptoms such as bloating, gas, diarrhea, and abdominal pain,” he says. These 7 signs suggest you have a leaky gut.

How Much MSG Is Safe?

Most research suggests you’d have to eat more than 3 grams of added MSG in a row to experience adverse effects — that’s according to a 2019 review of studies published in the journal Comprehensive assessments in food science and food safety. The FDA explains that a typical serving of foods with added MSG contains less than 0.5 grams of MSG, and Americans consume about that much per day on average. “MSG is generally found in processed foods. If your diet is full of fresh, whole foods, your MSG intake will be low,” says Rubin.

Yes, according to the National Celiac Foundation. Starches or sugars can be used in fermenting MSG, but wheat starch — which contains gluten — is not one of them. Even if wheat starch were used to make MSG, it is highly unlikely that the finished product would contain trace amounts of gluten. They further clarify by stating that a person with celiac disease may react to the wheat in soy sauce, but not to the MSG, for example.

Does MSG Cause Headaches?

MSG has been linked to headaches, including a debilitating migraine headache-but this link is far from conclusive. Some research even suggests that MSG does: not increase the risk of migraines. These findings were presented by the headache information site Curelator at the American Headache Society’s annual scientific meeting in 2018. In January 2018, the International Headache Society removed MSG from a list of causative factors for headaches. Here are 13 foods that make headaches worse.

Does MSG Make You Sleepy?

The FDA states that drowsiness can occur in some people who are sensitive to MSG and consume 3 grams or more of the flavor enhancer. “MSG is controversial and the research is inconsistent, but there are MSG-sensitive people and for them it can cause headaches, migraines, numbness, and extreme fatigue,” said Robin Foroutan, RDN, an integrative medicine dietitian at the Morrison Center in New York. York City and a spokesperson for the Academy of Nutrition and Dietetics. “I generally recommend that people with headaches, migraines and fatigue tend to avoid it.”

mark schlicht/shutterstockWhat types of foods usually have MSG added to them?

Soy sauce is common, Foroutan says. “It’s best to read the ingredient list if you want to avoid it.” Here are some more varieties:

It used to be easy to find MSG in fast food restaurants, but more and more chains are eliminating the flavorings. Here is the overview of some popular fast food chains and whether they use MSG.

Does Panda Express use MSG?

This popular Chinese restaurant does not add MSG to their dishes, but according to the company’s website, some ingredients may contain MSG of course.

Does Chick-fil-A use MSG?

MSG is present in some of Chick-fil-A’s menu choices, but they also offer a variety of options that do not contain added MSG, Chick-fil-A, Inc. states.

Does Burger King use MSG?

The chain has dropped the flavorings from all of its foods.

Does Subway use MSG?

The popular sandwich shop doesn’t add MSG to any of the items on the chain’s standard menu.

Does Domino’s use MSG?

The pizza delivery chain does not add MSG to its food. 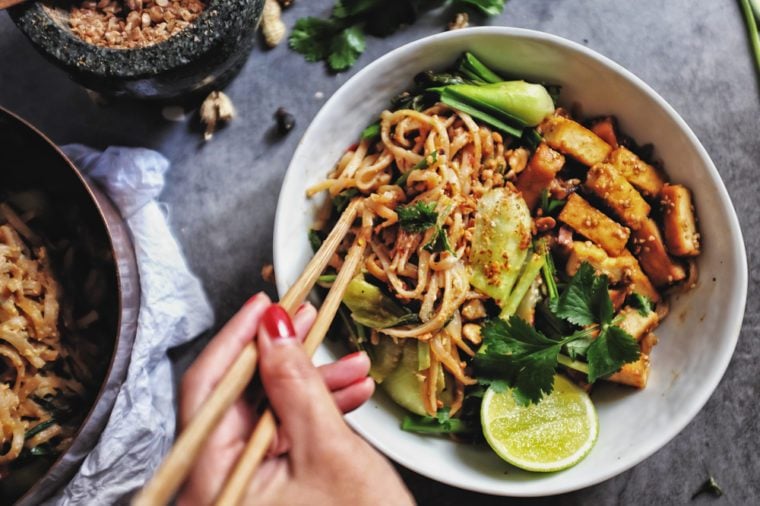 Could MSG Be Good For You?

Consuming umami-rich broth may promote healthy eating behaviors and food choices, especially in women at risk of obesity, according to a study in Neuropsychopharmacology. Researchers evaluated changes in women’s brains after they consumed chicken broth with or without MSG. The broth with added MSG illuminated areas of the brain linked to satisfaction and better control over eating, the researchers found. In addition, women who had the broth made better choices during their meal and preferred foods with less saturated fat.

“Our study suggests the possibility that people at high risk of obesity may benefit from an umami-rich broth before a meal to facilitate healthy eating and healthy food choices,” said Miguel Alonso-Alonso, MD, PhD, an assistant professor professor at the Center for the Study of Nutritional Medicine at Beth Israel Deaconess Medical Center in a press release.

“In Western and European cuisine, flavor is built by adding fat,” says Carlene Thomas, RDN, a dietitian in the Washington DC area and author of: The Wedding Wellness Workbook: Your Nutrition How-To Before “I Do”. This includes butter, whipped cream, and cheese. “For those struggling with calorie consumption, using umami to spice instead of fat can help with healthy weight management,” she says. (Here are 9 signs your overeating is actually an addiction.)

MSG can also be an important tool for reducing your salt intake, Thomas adds. “Using umami reduces salt, especially MSG. That means sodium can be reduced while preserving or improving the taste of a product,” she explains. That can make a big difference in sodium intake, she says. (View this 7 signs you’re eating too much salt.)

Walmart+: What You Need to Know About the Membership Program